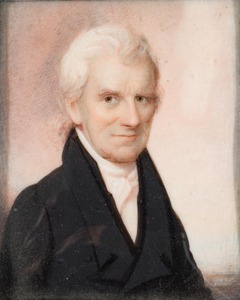 Other Name:
Moses Seymour, Jr.; Major Moses Seymour
Gender:
Male
Born:
July 23, 1742
Died:
September 17, 1826
Home Town:
Litchfield, CT
Later Residences:
Litchfield, CT
Marriage(s):
Molly Marsh Seymour (November 7, 1771)
Biographical Notes:
Major Moses Seymour was born in Hartford, Conn. in 1742 and died in Litchfield, Conn., in 1826. Early in his life, he moved to Litchfield, later becoming captain of a troop of horse in the 17th Connecticut militia regiment. In 1776, he was given the same rank in the 5th cavalry with which he served in repelling Maj. Gen. William Tryon's raid on Danbury, Conn., and at the surrender of Gen. John Burgoyne in 1777. He also served as commissary of supplies at Litchfield, which was then a depot for military stores. In 1783, he retired with the rank of major.

A Democrat-Republican, or Republican as they generally called themselves, he held the office of town clerk for 37 years from 1789 until his death, was elected annually to the legislature from 1795 to 1811, and was active in the affairs ...of the Episcopal church. He was greatly instrumental in developing the plan to use the proceeds of the sale of the Western Reserve for the promotion of public education. He was also involved in manufacturing hats with his brother, Samuel Seymour.

Several of Maj. Seymour's sons and grandsons achieved political prominence. His son Horatio was elected to the United States Senate from Vermont, serving two terms from 1821 until 1833. Another son, Henry, settled as a merchant in Pompey, New York, accumulated a fortune, and later moved to Utica. He was active in New York state politics and served as an Erie Canal commissioner. Henry's son Horatio served two terms as governor of New York. Maj. Seymour's grandson Origen Storrs Seymour was speaker of the house in the Connecticut legislature and later a judge of the state superior court and the state supreme court, ultimately becoming chief justice.

[more][less]
Profession / Service
Profession:
Military
Immediate Family (Why only immediate family?)
Related Objects and Documents
In the Ledger:
Contact Us