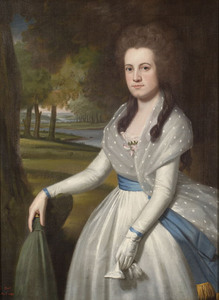 Mary Ann Wolcott Goodrich was well known for her charismatic demeanor, as well as being very sociable, having several close networks of friends in New York, Philadelphia, and Washington D.C.Her personality is captured through her correspondents ...with friends and family where she can write very sarcastically, mostly to lighten the mood of letter. Mary Ann Wolcott Goodrich died at the age of forty.

[more][less]
Quotes:
"[I]t had always been an established practice with the Litchfield Ladies to steal the hearts of all the Gentlemen who came here." "A New Haven Lady must have a degree of modest assurance to expect to keep her sweet-heart after he had seen the Litchfield beauties."

"I have been dancing all the forenoon, and my hand trembles so, I can hardly write intelligibly. We dance again this evening; and we all wish for your company. Meantime, you are poring over some antiquated subject, that is neither instructive nor entertaining. You cannot say so of our dancing; it is 'an amusement that profits the mind.'"

Written to her brother, Frederick, at Yale, 1789
Immediate Family (Why only immediate family?)
Related Objects and Documents
In the Ledger:

Records for the schools were sporadic, especially in the formative years of both institutions. If instructors kept comprehensive records for the Litchfield Female Academy or the Litchfield Law School, they do not survive. Researchers and staff have identified students through letters, diaries, family histories and genealogies, and town histories as well as catalogues of students printed in various years. Art and needlework have provided further identification of Female Academy Students, and Litchfield County Bar records document a number of Law School students. The history of both schools and the identification of the students who attended them owe credit to the early 20th century research and documentation efforts of Emily Noyes Vanderpoel and Samuel Fisher, and the late 20th century research and documentation efforts of Lynne Templeton Brickley and the Litchfield Historical Society staff.
CITATION OF ATTENDANCE:
Turner, Annie. "Woman of the Republican Court: Mary Ann Wolcott Goodrich." The Library Company of Philadelphia.
Contact Us