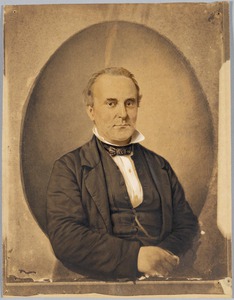 Gender:
Male
Born:
October 25, 1799
Died:
July 18, 1882
Home Town:
Litchfield, CT
Later Residences:
Augusta, GA
Clinton, GA
Marriage(s):
Virginia Hunter Gould (September 20, 1864)
Anna McKinne Gould (October 7, 1824)
Biographical Notes:
William Tracy Gould was the son of Judge James Gould and Sally Tracy. He graduated from Yale in 1816 and then studied at the Litchfield Law School in 1818, as did two of his brothers - George Gould and James Reeve Gould. Gould was admitted to the bar in Litchfield, Connecticut in September 1820 and moved to Clinton, Georgia in 1821.

At this time, Georgia offered many opportunities for a young and enterprising lawyer. In 1823, he moved from Clinton to Augusta, Georgia, where he lived and practiced law for the rest of his life. In February 1851, he was elected as a Judge of the Court of Common Pleas, later known as the City Court of Augusta. Inspired by his experience in Litchfield, Gould established a law school in Augusta, Georgia in 1833 which was modeled after Tapping Reeve and ...his father's lecture-style teachings. Prior to Gould's efforts, there was no similar movement for such an institution south of Virginia. The law school flourished for many years and was not suspended until 1854, upon the death of his eldest son.

Gould's first marriage was to Mrs. Anna Gardner McKinne on October 7, 1824. They were married for thirty-six years and had three children - James Gardner Gould, Julia Tracy Gould, and Henry Cummings Gould. His second marriage was to Virginia Highbie Hunter, the daughter of Wimberly J. Hunter of Savannah, GA, on September 20, 1964. During their eighteen year marriage William and Virginia had three sons - William Hunter Gould, Wimberly Gould, and George Glenn Gould.

Despite his New England heritage, Gould acted as a Confederate commissioner for the state of Georgia during the Civil War. Gould also commanded a local company in the Confederate service, which was composed of elderly men and was known as the "Silver Grays". This company was not expected to appear on the battlefield, but did guard duty at home over Federal prisoners and other local service.

Aside from his professional and civic duties Judge Gould was profoundly interested in Masonry, and had in that order a most distinguished record. On December 6, 1825, he was initiated as an entered apprentice in Social Lodge, No. 1. He quickly rose in position, and for a number of years he held the position of High Priest of Augusta Chapter, No. 2. He was Grand Marshal of the Grand Chapter of GA from 1829 to 1846, and Grand High Priest for several years. He became a member of the Georgia Commandery, No. 1, Knights Templar, on March 18, 1826, and was elected Grand Commander of the State in 1860, which position he held until 1868.

On July 18, 1882, at the age of eighty-three years old, William Tracy Gould passed away in his longtime community of Augusta.

Louisa's classmate Fanny Lyman wrote to William Greene in June of 1820, "William Gould is supposed to be engaged to Louisa Wait . . . he has treated her with marked attention for a year past and has been told of the disadvantage resulting from such attention but he still persists in his visits to and it is now believed by everyone to be a match."

When William left Litchfield in 1821 to establish a legal practice in Clinton, GA the couple continued dating and the engagement continued until 1824 when Louisa was living in Philadelphia and William in Augusta, GA. However, by October of that year, William was ...married to Anna McKinne.

Records for the schools were sporadic, especially in the formative years of both institutions. If instructors kept comprehensive records for the Litchfield Female Academy or the Litchfield Law School, they do not survive. Researchers and staff have identified students through letters, diaries, family histories and genealogies, and town histories as well as catalogues of students printed in various years. Art and needlework have provided further identification of Female Academy Students, and Litchfield County Bar records document a number of Law School students. The history of both schools and the identification of the students who attended them owe credit to the early 20th century research and documentation efforts of Emily Noyes Vanderpoel and Samuel Fisher, and the late 20th century research and documentation efforts of Lynne Templeton Brickley and the Litchfield Historical Society staff.
CITATION OF ATTENDANCE:
Houghton, Josiah. "LLS Law Notebook 1817-1818." Litchfield Law School Collection, Series 1, Subseries 1, Litchfield Historical Society. Available online at https://archive.org/stream/35102011793091#page/n11/mode/2up.