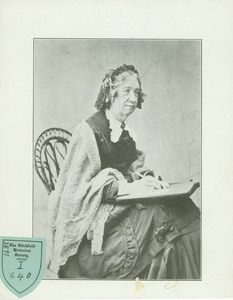 Gender:
Female
Born:
September 6, 1800
Died:
1878
Home Town:
Litchfield, CT
Later Residences:
Hartford, CT
Cincinnati, OH
Biographical Notes:
The daughter of Lyman and Roxana Foote Beecher, Catharine Esther Beecher was born in East Hampton, New York on September 6, 1800. In 1810 the Beecher family moved from East Hampton to Litchfield, Connecticut when Lyman became minister of the local Congregational Church. From 1810 to 1816 Catharine attended the Litchfield Female Academy, and she became an assistant teacher at the school after completing her own education.

In 1821 she took another teaching job in New London, Connecticut, where she taught girls music and drawing for a time. She returned to Litchfield in 1822 and was interested in teaching at the Female Academy. After returning to her hometown however, her fiance Alexander Fisher died and Catherine entered a deep depression. Later that year, she opened the Hartford ...Female Seminary in Hartford, Connecticut. The school became very successful and widely known. In 1832, Beecher hired John Pierce Brace to replace her as principal of the school. Brace and Beecher were close friends from their time together in Litchfield, and Beecher was deeply influenced by Pierce and Brace's teaching methods (using many of them in her own school, however as Brace noted privately and publicly, she never credited the Litchfield Female Academy or Brace for the role they played in molding her theories on education).

After Brace took over as principal of the seminary in Hartford, Catharine moved to Ohio and served as the head of the Cincinnati Ladies' Seminary in 1832. In addition to her education work, Catharine also did benevolent work and was an author. Catherine's writings included cookbooks, advice books, pamphlets, newspaper articles, textbooks, and essays and always had a female audience in mind. Her most popular book, "The American Woman's Home," was co-written with her younger sister, Harriet Beecher Stowe.
[more][less]
Quotes:
"Thus while Judge Reeve's law school attracted the young men from all quarters, the town was radiant with blooming maidens both indigenous and from abroad."
(VI, p.90)

"In consequence every pleasant evening witnessed troops of young people passing and repassing through the broad and shaded street to and from the favorite Prospect Hill. Of course the fashion extended to the law students, and thus romances in real life abounded on every side. Multitudes of fathers and mothers in this nation have narrated to their children their evening strolls as the time when their mutual attachment began."
Emily Noyes Vanderpoel, Chronicles of a Pioneer School from 1792 to 1833, Being the History of Miss Sarah Pierce and Her Litchfield School (1903) pp.179-180.

Beecher ...remarked that both male and female students read and discussed romantic novels of the day while "romances in real life abounded on every side."

In a letter written to Louisa Wait on January 22, 1811, Beecher commented on the broken engagement of Litchfield Female Academy student Sarah Gilbert saying that her family lost it's fortune "by her Uncle's failure" and that "as soon as Alexander heard of it he left her...There was a kind & generous heart that would not have forsaken the afflicted & the orphan in her utmost need.”

“The Mr. Petit that married Theodosia was originally from Marietta, Ohio. They were married at our house & I like Petit much -- tho’ he is an odd sort of genius -- in some things. He will be a very kind & attentive husband & in my last letter from Detroit, Theo’ says she is ‘as healthy & happy as she can well be’ which is some consolation for her being so far & so long from us. I fear it will be some years before I see her again & I feel the separation very much for she was a lovely girl & very dear to me.”

In that same letter, Catharine also wrote about a planned trip to Maine and Boston with her “mother’s sister Lucy” [Porter].

“She is a lovely girl about my age & has spent the winter here. She will be married next fall to Mr. John Brace & will settle here which will be a great comfort to mama & all of us…"

The Moral Instructor for Schools and Families: Containing Lessons on the Duties of life (1839)

The Duty of American Women to Their Country (1845)

The Evils Suffered by American Women and Children: the Causes and Remedy (1846)

Physiology and Calisthenics for Schools and Families (1856)

Records for the schools were sporadic, especially in the formative years of both institutions. If instructors kept comprehensive records for the Litchfield Female Academy or the Litchfield Law School, they do not survive. Researchers and staff have identified students through letters, diaries, family histories and genealogies, and town histories as well as catalogues of students printed in various years. Art and needlework have provided further identification of Female Academy Students, and Litchfield County Bar records document a number of Law School students. The history of both schools and the identification of the students who attended them owe credit to the early 20th century research and documentation efforts of Emily Noyes Vanderpoel and Samuel Fisher, and the late 20th century research and documentation efforts of Lynne Templeton Brickley and the Litchfield Historical Society staff.
CITATION OF ATTENDANCE:
"Rules for the School and Family" and Names of the Young Ladies belonging to Miss Pierce's School in the Summer of 1814 (Litchfield Historical Society - Litchfield Female Academy collection).

In the Autobiography of Lyman Beecher, his daughter Catherine Beecher writes "Miss Sarah Pierce . . . Found frequent occasions for seeking cousel and aid from her pastor. In return she gave gratuitous schooling to as many of our children as father chose to send, for occassionally young boys found admission." (Beecher, Charles, Ed. Autobiography, Correspondence, Etc., of Lyman Beecher, D.D. Vol. I New York: Harper and Brothers, 1864).

Emily Noyes Vanderpoel transcribed of copy of "Jephthah's Daughter" a play written by Sarah Pierce. The students who acted in the play are ...listed. C. Beecher played Bethulah (Vanderpoel, Emily Noyes. Chronicles of A Pioneer School From 1792 To 1833. Cambridge, MA: The University Press, 1903).