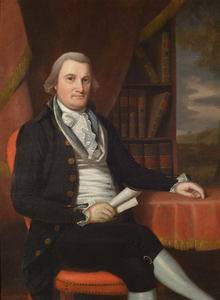 Judson Canfield was educated at Yale College, graduating in 1782. In 1786, his uncle, John Canfield, the first lawyer in Sharon, CT, died, and Judson moved to Sharon and established a successful law practice. Many of his clients conducted business or resided in Dutchess County, New York. Ten years later in 1796, Canfield purchased land in the Western Reserve (later Ohio) from the Connecticut Land Co. His holdings eventually totaled thousands of acres, including property in present-day Bainbridge, Canfield (which was named for him in ...1800), Cleveland, Medina, Newton, and Newton Falls.

On March 5, 1786, Canfield married Mabel Ruggles. Together, the couple had four children together. His son, Henry Judson Candfield attended Yale College in 1806 and later attended the Litchfield Law School in 1808. His three daughters, Julia, Elizabeth and Caroline attended the Litchfield Female Academy. His daughter Julia and her husband, Wiliam Mackay Flewwelling were executors of his will after he passed away on February 5, 1840 in New York City.

In 1802, Judson Canfield was elected to the Connecticut General Assembly and served until 1809. He was later elected as State Senator from 1810 to 1815. From 1808 to 1815, he also served as an associate judge of the county court for the county of Litchfield. In 1815, he moved to Ohio, devoting himself mainly to farming and disposing of his properties.