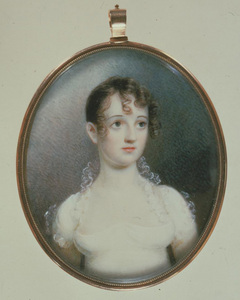 Litchfield Law Students and brothers Thomas and Josiah Telfair both fell deeply in love with Elizabeth. Their father Edward of was a signer of the Articles of Confederation, the first Governor of Georgia under its new constitution of 1789, and a prominent plantation owner.

One of the Telfair brothers "offered himself and was refused" and "afterwards walked the twenty miles from Litchfield to Sharon only to gaze at the light in her window and walk back again."

Emily Noyes Vanderpoel, Chronicles of a Pioneer School from 1792 to 1833: Being the History of Miss Sarah Pierce and her Litchfield School (1903) p.128.
Education
Years at LFA:
1809,1814
Immediate Family (Why only immediate family?)
Related Objects and Documents
In the Ledger:

Records for the schools were sporadic, especially in the formative years of both institutions. If instructors kept comprehensive records for the Litchfield Female Academy or the Litchfield Law School, they do not survive. Researchers and staff have identified students through letters, diaries, family histories and genealogies, and town histories as well as catalogues of students printed in various years. Art and needlework have provided further identification of Female Academy Students, and Litchfield County Bar records document a number of Law School students. The history of both schools and the identification of the students who attended them owe credit to the early 20th century research and documentation efforts of Emily Noyes Vanderpoel and Samuel Fisher, and the late 20th century research and documentation efforts of Lynne Templeton Brickley and the Litchfield Historical Society staff.
CITATION OF ATTENDANCE:
"List of Pupils Gathered From Letters and Other Sources" (Vanderpoel, Emily Noyes. Chronicles of A Pioneer School From 1792 to 1833. Cambridge, MA: The University Press, 1903).
Contact Us