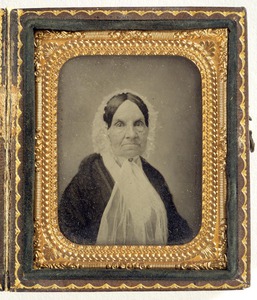 Gender:
Female
Born:
August 1780
Died:
June 22, 1863
Home Town:
Litchfield, CT
Later Residences:
Litchfield, CT
Biographical Notes:
Mary Pierce was born in Litchfield, CT in August 1780. Her parents were John Pierce and his second wife Mary Goodman Pierce. Mary's sister Sarah founded the Litchfield Female Academy in 1792. Although she never attended the Female Academy as a student, Mary assisted Sarah in running the school by managing the boarders who stayed in the Pierce house and keeping the financial records for the institution. Living her whole life in Litchfield, Mary died on June 22, 1863 and is buried in the East Cemetery.
Quotes:
Ca. 1815, Mary wrote Charles Loring about Anna Pierce Brace's fear for her heartbroken friend, James Johnston, a Litchfield Law School student. Johnston had been rebuffed by Litchfield Female Academy student Euphemia Blanch "after having given him by the pleasure with which she received his attentions before his declaration great encouragement to be accepted."

The rejection devastated Johnston who, according to Mary Pierce, was "a foolish unprincipled youth" who "threatened to kill himself."

Johnston's classmates sat up with him all night to prevent his suicide and he left Litchfield the next morning. He then wrote his Litchfield friends, including Anna, "frenzied letters." He asked Anna to show the letter to Euphemia, "thinking that if there were a spark of affection ...in her heart such extravagant attachment would awaken it, and move her to save him."

Mary Pierce said Anna worried so much for Johnston that "her cheeks grew pale, her appetite was entirely gone, and her nights sleepless."

Pierce said Amelia was lovely in appearance, “but there is an indelicacy in her visiting at a Gentleman’s boardinghouse.”

Pierce deemed Davis “an excellent man” since “[a good son] resolves to comply with his father’s wishes and marry a lady of fortune in Delaware. Tho’ still professing in a letter to Mrs. Lord to feel Miss Peck’s superiority to all others…”

Loring Collection, Litchfield Historical Society
[more][less]
Additional Notes:
Mary and her sister Sarah very frequently entertained Litchfield Law School students and Sarah supervised the social events. If displeased by a student's behavior, she would ban him from calling at the house. It was said that "to be denied admission to Miss Sally Pierce's parlor was the deepest disgrace which could befall a young man."
Profession / Service
Profession:
Educator
Immediate Family (Why only immediate family?)
Related Objects and Documents
In the Ledger:
Contact Us